Do many of us realize that there are negative, even violent, video games about Catholic sisters available today through the internet to anyone?

“A Question of Habit: Changing the Stereotype of Catholic Sisters Today,” brought nearly 90 communicators and other professionals serving 13 religious congregations to join filmmaker Bren Ortega Murphy for a screening of her documentary, “A Question of Habit,” narrated by Susan Sarandon.

Following the screening participants had the opportunity to discuss the use of sister- images by the media and the challenges these, and other images, pose to one’s specific role in serving a congregation of women religious. Discussion focused on helping participants in creating awareness, in exploring alternative ways to promote sisters and in expanding understanding of women religious today. Networking with professional peers was core to the day’s program.

First and foremost, communicators concluded that they and everyone need to tell even more vigorously the stories of how sisters have been and continue to be on the frontlines of impacting American life and culture.

“Don’t fight the enemy,” said Bren Murphy Ortega, “embrace the enemy and use his or her language” to juxtapose a contemporary image of sisters. She urged communicators to use the marketing rhetoric and format of popular culture.

Some participants advocated that sisters need to “lean in” even more than they are already and “stand up” publicly for the issues and concerns to which they give so much passion today – be more visible in the public discourse. Others commented that sisters might consider adopting a common identifier or outward symbol, like a cross-necklace, worn by women religious as a way to be more visible or re-inventing a truer icon for today’s popular culture to give more credibility and respect to themselves and their vocation.

Although most Roman Catholic women religious in the United States have not worn
the full habits of their orders for over 40 years, images of Nuns and Sisters in habits can be found in numerous and surprising aspects of pop culture.

Bren Ortega Murphy and Mike Whalen created a film that examines the wide variety of visual images of Catholic Nuns and Sisters used in contemporary U.S. popular culture and contrasts these images with the lives of actual Sisters. The film looks at the nature, scope and significance of these images as well as possible explanations for their increasing popularity and possible impact on our understanding of women religious.

The workshop was sponsored by Sisters United News* of the Upper Mississippi River Valley and communicators for regional congregations of women religious. 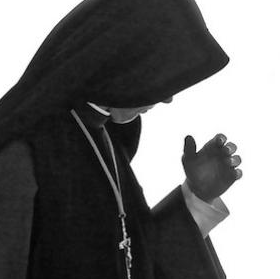