Maryknoll, NY—Mother Mary Joseph Rogers, MM,  founder of Maryknoll Sisters of St. Dominic, has been named one of nine American women to be inducted in 2013 into the National Women’s Hall of Fame (NWHF), it was announced yesterday by the NWHF.

The National Women’s Hall of Fame, which is the oldest national membership organization dedicated to recognizing outstanding individual American women and their achievements, selects  up to 12 women every other year “to honor in perpetuity whose contributions have been of the greatest value for the development of the country.” They are selected by a distinguished board of judges from leading national organizations, education institutions and diverse fields of human endeavor.

Mother Mary Joseph, whose “extraordinary achievements were recognized and applauded” by all the judges, according to NWHF deputy director Amanda Bishop, will join the 247 eminent women who have been inducted into the Hall since its founding in 1969 at a special induction ceremony to be held at the NWHF headquarters in Seneca Falls, NY, on Saturday, October 12, 2013. Among others included in this year’s list besides Mother Mary Joseph were Betty Ford and House Democratic Leader Nancy Pelosi.

“We are thrilled and honored by Mother Mary Joseph’s selection,” said Sister Janice McLaughlin, MM, president of Maryknoll Sisters, upon receiving the news from NWHF president Beverly P. Ryder, “and happy for the recognition it gives to our founder who achieved so much, not only for women religious, but for all American women, at a time when possibilities for them were far more limited than they are today.

“Mary Josephine Rogers, as she was called prior to joining religious life, broke through the negative stereotypes about the role of American Catholic women in church and society at the beginning of the twentieth century,” Sister Janice commented. “As founder of the first American mission congregation of Catholic women, she proved that women were equal to the demands of life and ministry abroad, particularly in places where poverty, physical hardship and sometimes, even safety during wartime, were commonplace.”

A graduate of Smith College,  Mother Mary Joseph was a woman gifted with natural leadership ability and a charismatic bearing that quickly showed others, among them Father James A. Walsh, founder of Maryknoll Fathers & Brothers, with whom she worked, that she was the perfect person to lead the first US-based congregation of women religious dedicated to foreign mission in 1912.

Born on October 27, 1882, in Roxbury, MA,  Mary Josephine “Mollie” Rogers, the fourth of eight children, was inspired by her Irish Catholic parents with a passion for the church and its works worldwide that they sought to sow in all their children.

While in a season of wondering how she might personally contribute to the work of the Church,  Mollie overheard the joyful praises of Protestant students exiting a service at Smith in 1904, where they had pledged their lives to missionary service.  “If Protestant women can do this,” she wondered to herself, “why not Catholic women, as well?”

One year later, following her own graduation from Smith, Mollie returned to her alma mater where, in addition to assisting the instructor in zoology with lab experiments, she began a missions club for Catholic women.  It was while seeking materials to use for the club that she met Father Walsh and soon began assisting him with a magazine he had begun publishing, “The Field Afar”, now known simply as Maryknoll.

Following the congregation’s foundation on January 6, 1912, Mollie took the religious name Mother Mary Joseph.  As she oversaw the growth of the congregation and its expansion into mission, she also placed great value on diversity, welcoming women from all nations. She also integrated prayer with apostolic ministry “so that no one would take us for anything but contemplatives in mission.”

Mother Mary Joseph drew from a lifetime of spiritual depth when she stressed the need for the sisters to be compassionate women, adaptable and willing to try new ways without fear of failure or censure. Above all, she emphasized the primacy of a holy life.

Her innovative professional and mission preparation of the sisters was recognized through honorary doctorates given her by Smith, Trinity University and Regis College, Boston. By the time of her death on October 9, 1955, there were 1,065 sisters working in twenty countries and serving minorities in several cities in the United States.

Today, Maryknoll Sisters serve in 26 nations around the world, ministering to all people, regardless of race, creed or nationality, with a special emphasis on working with the poor, with women and with all those who struggle on the fringes of society. Their numbers include doctors and nurses; authors, artists and dancers; social workers, ecologists and peace activists; theologians and spokespersons to the United Nations. 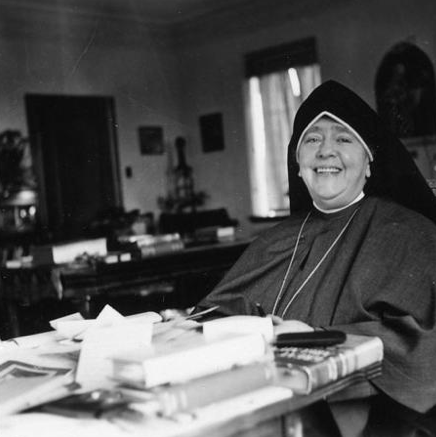