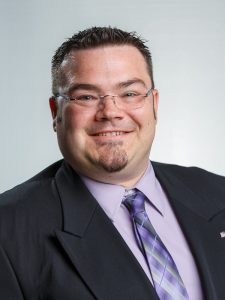 The board of the Communicators for Women Religious (CWR) has hired the organization’s first executive director. Nicholas T. Schafer began serving in this position June 1 at the Catholic Theological Union (CTU) in Chicago, where CWR now has its international office.

Schafer most recently served as the chief communication and development officer for the St. Joseph County Public Library in South Bend, Indiana. His prior work includes communication and fundraising roles as the college fund director for Saint Joseph’s College (Rensselaer, Indiana) and environmental programs supervisor for the City of Elkhart, Indiana. Schafer also served as an AmeriCorps member and team leader supporting projects with Habitat for Humanity, Disaster Relief Services, The Nature Conservancy, and various educational institutions throughout the Southeast and Midwest.

“Nick’s enthusiasm, creativity and mission-driven work ethic will serve him well as the executive director for CWR,” said Eileen Dickerson, chair of the CWR board of directors. “Nick has also had extensive exposure to religious life and religious communities.”

As CWR executive director, Schafer will be spearheading the implementation of CWR’s three-year strategic plan and helping the organization realize its vision to become the go-to organization for communications about women religious. A $1.5 million grant from the Conrad N. Hilton Foundation, distributed over the next three years, has enabled CWR to hire full time staff, set up a national office, and begin the process of expanding its mission beyond a network of support for its members.

“There has never been a more important time to talk about the good works in which the sisters are engaged,” Schafer said. “The vital work our members do in telling the stories of women religious is at the heart of who we are as an organization. CWR’s strategic plan focuses on expanding the organization’s infrastructure, enhancing member services, media and outreach to the public, and development of CWR as a leader in the area of communications for women religious. I look forward to working with the CWR board and members to accomplish these goals.”

Schafer will be working with CWR coordinator Susan Oxley, who will become a full time employee of CWR on June 1. Oxley has served the CWR organization and its members as an independent contractor for 12 years. A former CWR board member, Oxley also worked as editor of Dominican Life | USA, published by the Dominican Sisters’ Conference, and communications coordinator for the School Sisters of St. Francis, Milwaukee, Wisconsin.

The grant to CWR reflects the Conrad N. Hilton Foundation’s commitment to strengthening congregations of Catholic sisters in service to people in need around the world. The Conrad N. Hilton Foundation was created in 1944 by international business pioneer Conrad N. Hilton, who founded Hilton Hotels and left his fortune to help the world’s disadvantaged and vulnerable people. The Foundation currently conducts strategic initiatives in six priority areas: providing safe water, ending chronic homelessness, preventing substance abuse, helping children affected by HIV and AIDS, supporting transition-age youth in foster care, and extending Conrad Hilton’s support for the work of Catholic sisters. From its inception, the Foundation has awarded more than $1 billion in grants, distributing $100 million in the United States and around the world in 2014. For more information, please visit www.hiltonfoundation.org.