Report from the CWR Board 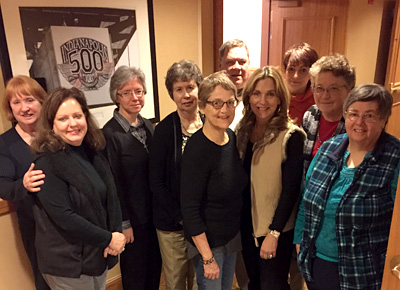 In the interest of keeping you informed, the CWR Board of Directors shares highlights of our monthly meetings. The Communicators for Women Religious Board of Directors met in Indianapolis, Indiana at the Hilton Indianapolis Hotel & Suites from January 18 through January 21, 2016. The hotel is the site of the 2016 CWR Conference.

The meeting days began and ended with 30 minutes of prayer, music and reflection.
Treasurer Sister Beth Kress, PBVM created and led the prayer service, which focused on:

Board Chair Eileen Dickerson welcomed both new and returning Board members and thanked them for their service. New Board members Rochelle Cassella, Dave Eck, and Sarah Jenkins were invited to ask questions regarding the orientation information sent to them before the meeting. Jean Merry has served previously on the CWR Board.

Eileen shared an e-mail message from Sister Lorraine Wesolowski, OSF, one of the founding members of our organization:

“To all who gave birth to the strategic plan, Congratulations! It is an exceptional piece of work now to be executed moving forward. I take great pride in how far the organization has come since those first days when some of us sat around a table and dreamed! Blessings to all!”

Videoconference with women religious in Ireland

The Board met, via videoconference, with a group of women religious in Ireland who are considering forming an Ireland region of CWR, under the leadership of CWR member Sister Patricia Lenihan, RSC. During the 30-minute meeting, we introduced ourselves, as did the Irish sisters. We answered their questions about the benefits of CWR membership and assured them that we will support their efforts. The videoconference was a warm and delightful outreach, and we were pleased at the opportunity for potentially expanding CWR’s international membership.

Minutes Approved
Minutes of our December Board videoconference were approved.

The Board requests all CWR members to share the E.D. position description/information with qualified individuals who may be interested.

Coordinator’s Report
Susan informed the Board that nine new members have joined CWR since October. Membership is now at the organization’s highest level, at 198 members. We hope to break the 200 benchmark soon!

The strategic plan was reviewed by the Board and committee chairs were asked to reflect on the actions their committees can take immediately to move the plan forward.

Conference 2016 Chair Kathy Gatliff, who was unable to attend the meeting in person, met with the Board via videoconference. Her committee is fine-tuning details on the conference schedule, speakers, workshops and evenings out.

Development Committee Chair Kate Martin has completed preliminary ground work on relevant contacts and exhibitors for Conference 2016. She presented ideas for revised categories, pricing and forms for sponsors and exhibitors. She is excited about beginning the Conference 2016 development initiatives and is seeking members for the committee who will help with researching and contacting prospective sponsors and exhibitors and try to get a Local Ministry Marketplace this year. Please contact Kate if you are interested in serving on the Development Committee: develop@sanrafaelop.org

Conference 2017
The Board reviewed the results from the survey regarding members’ interest in possibly attending a conference in Canada. The responses were extremely positive.

Other Business
The Board:

Some Board members officially toured the hotel, in anticipation of the conference. Others left the meeting due to the oncoming snow storm. During the meeting, Board members found the hotel to be an attractive site, with nice rooms, accommodating staff, and good food. There are also many restaurants, shops and attractions within walking distance.

Best wishes for success in your work in 2016!

“The benefits you receive as a member of CWR are made possible by an ALL VOLUNTEER Board. CWR can thrive and grow as long as our members volunteer their gifts through Board service.”