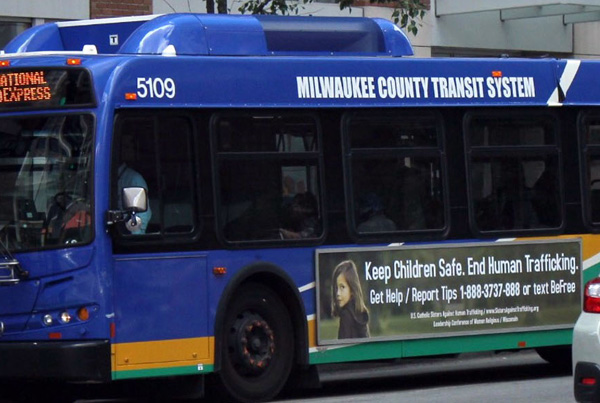 Sixteen congregations of Catholic Sisters have banded together to create an awareness campaign confronting human trafficking in Wisconsin. The Sisters purchased advertising on buses in Milwaukee County (now through Aug. 25), Oshkosh (through 2016) and Green Bay (September through February 2016). “Trafficking people, including children, is a travesty in today’s world,” said Sister of St. Agnes Jomarie Zielke, representing Wisconsin’s Leadership Conference of Women Religious (LCWR). “It is nothing short of modern slavery, exploiting people for profit through sex and labor.”

The ad highlights the national hotline number and text address, with the hope that victims will see it and that the general public will become alert to the existence of trafficking in Milwaukee and throughout the state. It stresses keeping children safe by ending trafficking.

Human trafficking ranks with gun and drug trafficking as the top crimes globally. “People think this is a problem in developing countries. It is, but it is also prevalent in every one of the United States, including Wisconsin,” she said.

Wisconsin ranks among the worst states for human trafficking, with both sex trafficking and labor trafficking. Young girls and children are especially vulnerable. Two weeks ago, a seven-year-old Milwaukee girl was nearly abducted while playing in front of her home. Fortunately, she escaped, and the alleged would-be captor has been arrested. The average age of a child coerced into sex trafficking is 12-14.

The bus ads are one component of the Catholic Sisters’ awareness campaign confronting human trafficking. The Sisters are also preparing a toolkit to help Catholic parishes throughout Wisconsin educate their congregation about the dangers and prevalence of human trafficking in their own area. Along with providing resources, statistics and information, the toolkits encourage parishes to collaborate with local police and programs already in place in their area.

“Human trafficking is so insidious because it is kept hidden through intimidation and control,” Zielke noted. “We need to bring it out into the open so victims can get the help they need to regain control of their lives.”